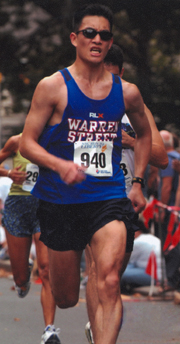 Derek S. Tan was born and raised in Rochester, New York. His parents, both chemists at Eastman Kodak, discouraged him from going into chemistry, and so, naturally, he became a chemist. He received his BS in Chemistry from Stanford University in 1995, working with Prof. Dale G. Drueckhammer on the dynamic enzymatic resolution of thioesters. He then went onto graduate studies with Prof. Stuart L. Schreiber at Harvard University, carrying out early research in the field of diversity-oriented synthesis. His work included the synthesis of a combinatorial library of over two million polycyclic small molecules derived from shikimic acid. After receiving his PhD in Chemistry in 2000, he joined the laboratory of Prof. Samuel J. Danishefsky at the Memorial Sloan Kettering Cancer Center (MSK), where he studied natural products total synthesis and helped complete the first total synthesis of the novel terpenoid antibiotic, guanacastepene A.

He began his independent career in 2002 as an Assistant Member in the Molecular Pharmacology & Chemistry Program of the Sloan Kettering Institute for Cancer Research (SKI) at MSK, and was appointed as a Tri-Institutional Assistant Professor at The Rockefeller University and Weill Cornell Medical College in 2003. He was promoted to Associate Member and Tri-Institutional Associate Professor in 2008 and to tenured Member in 2012 and Tri-Institutional Professor in 2013. In 2015, he was appointed Chair of the newly formed Chemical Biology Program in SKI. Since 2012, he has also been the Director of the Tri-Institutional PhD Program in Chemical Biology, a joint graduate program offered by MSK, The Rockefeller University, and Weill Cornell Medical College.

His current research interests center on the development of new chemical strategies toward and biological applications of molecules inspired by natural products. His laboratory leverages forefront methodologies in organic synthesis and multidisciplinary collaborations with biologists to identify new chemical probes that address a variety of biological targets implicated in cancer and infectious diseases.

05/15/2017
New rules for Gram-negative antibiotics
Chemical & Engineering News
In the fight against pathogenic bacteria, Gram-negative bacteria such as Escherichia coli and Pseudomonas aeruginosa are particularly challenging foes. A new study by Prof. Paul Hergenrother’s group demonstrates the power of a systematic approach to assessing the influence of physicochemical properties on compound accumulation in Gram-negative bacteria. [Full text]

11/2015
An interview with Derek Tan
MSK Center News
Chemical biology is bringing new analytic techniques, molecular probes, and potential therapeutic leads to biomedical research — and to cancer research in particular. To take advantage of this new vanguard, Memorial Sloan Kettering has created a Chemical Biology Program within the Sloan Kettering Institute under the leadership of chemist Derek Tan. [PDF]

09/16/2013
Taking clues from Nature for the development of new drugs
MSK On Cancer Blog
Natural products are molecules that are produced by living organisms. They are often made by bacteria and fungi, but they may also be made by plants and animals. Derek Tan discusses why natural products offer inspiration for the development of new drugs. [Full text]

01/28/2013
Ringing in new drug candidates
Chemical & Engineering News
Many compound screening collections consist primarily of molecules that do not possess the structural, stereochemical, and functional complexity equivalent to that of natural products. Prof. Paul Hergenrother’s group has reported a new ring distortion method of constructing natural-product-like libraries to address that deficiency. [Full text]

05/12/2008
Working at the Hospital: Challenging and rewarding careers in chemistry await at research hospitals and medical centers
Chemical & Engineering News
For many chemists, the traditional career path begins with a job in industry or a position leading to a tenure-track spot in an academic department. But synthetic, medicinal, and organic chemists are increasingly carving out rewarding careers at research hospitals and medical centers. [Full text]

11/01/2007
An Interview with Derek Tan
MSKCC Center News
To understand biology, scientists often use the power of chemistry. As the head of a laboratory in the Molecular Pharmacology and Chemistry Program at the Sloan Kettering Institute, Derek Tan is a young leader in the field of chemical biology. [Full text]

05/17/2006
Chemical Biology Initiative Symposium 2006: Frontiers of Drug Discovery: Chemical Library Development and Screening
University of Minnesota
The ability to design chemical probes capable of modulating and altering biological processes in highly defined ways is essential to carrying out modern biomedical and pharmaceutical research. The aim of this workshop was to inform biomedical, pharmacological, medicinal, computational and chemical researchers at the University of Minnesota of recent advances in chemical library design and screening with the goal of fostering multidisciplinary research projects harnessing these techniques. [Program]

08/10/2004
Tireless Hunter of Cures and Kids
New York Post
Derek Tan, a 31-year-old organic chemist who has been part of the campaign to help missing children since he was a teenager, lives by a simple formula. “It comes back to trying to address people issues,” said Tan, who heads a research lab at Memorial Sloan Kettering Cancer Center and also serves as an advisory board member to the Manhattan office of the National Center for Missing & Exploited Children. [Excerpt | Full text ]

06/01/2004
James Engstrom and Derek Tan are Named Members of the Field of Chemistry
Cornell Chemistry and Chemical Biology Newsletter
The department is pleased to announce the addition of James R.Engstrom and Derek S. Tan to the graduate field of chemistry. [Full text ]

11/20/2003
Access is uppermost for research collaborators in Tri-Institutional program
Cornell Chronicle
For biomedical educators who have joined the Tri-Institutional Research Program (TIRP), it’s all about access — access to the technological resources, to potential scientific collaborators and to the top-tier students they need to do their very best work.

Doctors and faculty members often work with pharmaceutical, device, biotechnology, and life sciences companies, and other organizations outside of MSK, to find safe and effective cancer treatments, to improve patient care, and to educate the health care community.

MSK requires doctors and faculty members to report (“disclose”) the relationships and financial interests they have with external entities. As a commitment to transparency with our community, we make that information available to the public.

The information published here is for a specific annual disclosure period. There may be differences between information on this and other public sites as a result of different reporting periods and/or the various ways relationships and financial interests are categorized by organizations that publish such data.

This page and data include information for a specific MSK annual disclosure period (January 1, 2021 through disclosure submission in spring 2022). This data reflects interests that may or may not still exist. This data is updated annually.